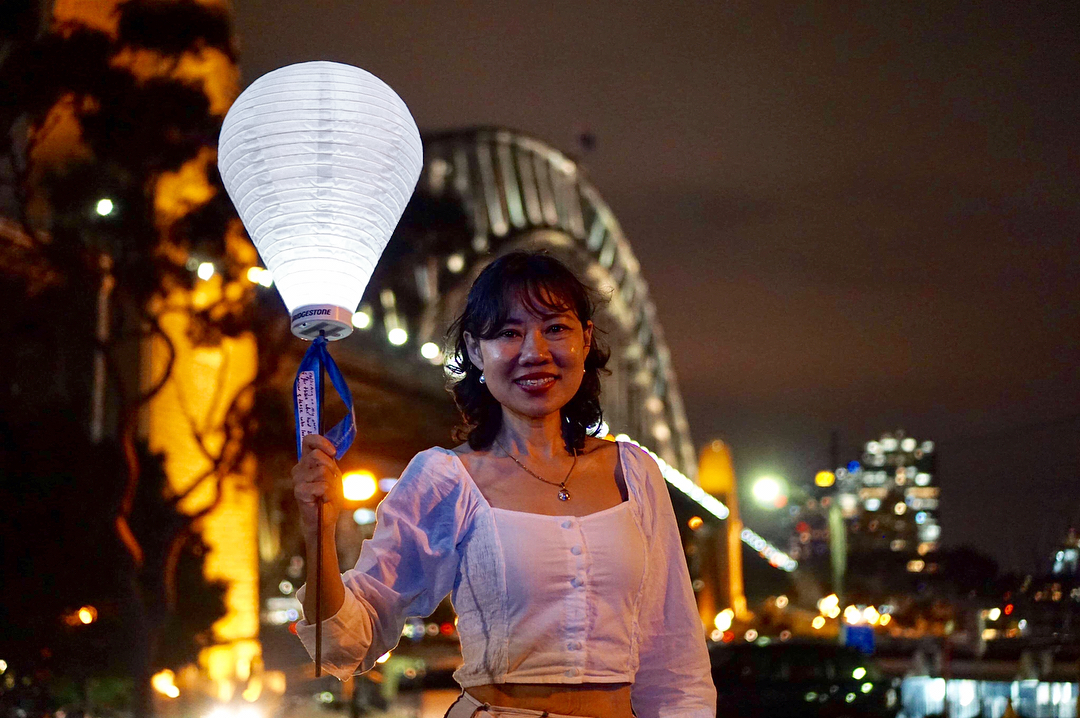 In 2016, Sharon Frazer would walk fifteen kilometres a day through her surrounding Sydney suburbs. She was a healthy, happy and highly busy mum to four children going through school. She had no idea that she was about to enter the toughest year of her life.

She thought nothing of a few bruises across her arm that appeared in early November, putting them down to clumsiness. When she began to experience severe fatigue and a temperature, she thought it was due to the holiday period nearing and stress from preparations for Christmas being around the corner.

Eventually, her daughter booked an appointment at the GP to understand what was going on. Their worst fears were confirmed that night when Sharon was diagnosed with acute myeloid leukaemia at the age of 48.

“Overnight, my life completely changed,” Sharon said. “They said they needed to start chemotherapy straight away.”

Sharon’s journey through treatment was rocky. Her first round of chemo didn’t work, and further results on her leukaemia confirmed it to be a more aggressive form than was first identified.

“I was devastated because all of a sudden, my chances of survival dropped dramatically. The treatments made me really sick. My whole body was covered in rashes. My skin became tender, bumpy, irritated and itchy,” Sharon said.

“I was bleeding quite a lot, as well. My nose was bleeding, my gums were bleeding, and everywhere I looked there was blood... We only found five matching blood donors to me in New South Wales. I'm super grateful to them. Without them, my life would really have been at risk... I was fed through a tube, and I could feel the tube in my throat. I felt so uncomfortable and sick.”

Because the first round of chemo didn't work, Sharon’s doctors suggested a combination of chemotherapy and trial medications. Sharon says she knew that her life was on the line, so it wasn't really a choice for her.

“I had to trust my doctor's advice. Knowing my chances of survival were low... needless to say I was very scared, but I knew that I needed to be strong and positive,” Sharon recalls.

“I celebrated my birthday, Christmas and the new year at the hospital.”

With children aged between fifteen and twenty, friends and family tried to comfort Sharon that her children were on their way to adulthood and would continue to flourish even if she was not around to see them grow up.

“To me, [having children] is like planting a seed in the garden. You water the seed, you nurture the plants, you put in effort and love, and now the plant is growing, and you see the leaves,” Sharon said. “Even if you don't water every day, the plant will grow. But I wanted to see the plant flowering, and to me, it hasn't flowered yet. It hasn't blossomed, and I wanted to see my kids blossom. I wanted to see them going to university, graduate, get married and so on.”

At the time, Sharon’s children were studying for their final school exams. She says that she would always put on a smile when they visited her, reassuring them that she was doing well and fighting hard.

In fact, even before her transplant, Sharon had planned her exact outfits she would wear on the day of her children’s graduations and school formals.

“I planned ahead and kept my mind occupied with what I would be doing with them in the future. I even bought a plane ticket to go on a holiday once I was out! I wanted us to be thinking ahead, rather than stuck in the moment worrying together.”

After a few rounds of chemotherapy, Sharon was able to have her bone marrow transplant.

“Despite the search, there was no perfect match, and that was another devastating setback for me. My last chance was my brother, who lived overseas. After an agonizing ten weeks of waiting, we found out that he was a match. I cried and cried when the doctor told me. For me, every step of the treatment seemed to bring me closer to a bad outcome, but I managed to get through. It was an exhausting journey."

After having been through her own cancer journey and now living happily in remission, Sharon says a large purpose in her life now is to give back to the hospital, doctors and community that supported her throughout her treatment.

“Giving back means a lot to my family and I. My whole family has signed up to be blood and bone marrow donors. Blood donors really do save lives. I needed blood transfusions a few times a week to stay alive, and my blood donors really did give me the gift of life... I now volunteer at the hospital, and I also volunteer for the Christmas gift wrapping fundraising for the Leukaemia Foundation. I'm a lifeblood hero for the foundation, and my daughter also shaved her head for the World's Greatest Shave and managed to raise over $6000 for the foundation!”

Sharon’s support for the community doesn’t end there. For the last three years, Sharon and her family have taken part in Light the Night to help raise funds and stand beside the blood cancer community at the Sydney events. The event holds a special place in her family.

“That night in 2017 was my very first night out after my bone marrow transplant. It was very emotional for me. I remember when they asked everyone to put down their lanterns... They asked everyone who had a gold lantern for a loved one they had lost to blood cancer to raise them, and I looked up and there were so many yellow lights,” Sharon remembers.

“When they called out to those who had been diagnosed or survived cancer with the white lanterns, there weren't many lanterns being put up... I couldn't control my tears. My daughters and their friends were holding their blue lanterns to show support for all of us affected, and from then on, I told myself that every year, I would never miss this event. It's a chance to reflect on my own journey with leukaemia and I feel so grateful and lucky."

Reflecting on the importance of holding on to hope throughout her journey, Sharon feels that events like Light the Night are crucial for patients to feel support and connect with the community through hope for a better future.

“Because of all of these positive people around me that night, and all the people who gave me support, I almost felt like I couldn't fail them. Seeing others there as well as survivors, I got to know them and we shared stories. I met someone who had their transplant eight years ago, so I thought, ‘If he can make it, I can make it too.’ I tell patients in the hospital about this moment when I volunteer.”

Sharon says that when she tells other cancer patients her story, they often feel a renewed sense of hope. Even just her presence as a volunteer in the hospital can be enough to inspire others.

“No matter how painful it might be at times, or how sick they might be, they can see me and know that I have been through that and made it out. Sometimes I don't have to say much at all. Just being there gives them comfort and reassurance,” she said.

Today, Sharon says she feels a renewed sense of attentiveness and appreciation for the little moments in life. Her journey to remission has been anything but easy, but slowly, things are getting back to normal.

“I appreciate the ability to breathe the fresh air, to enjoy the golden sunshine, listening to the sound of the waves, the fragrances of grass and the beautiful flowers. I never used to. I was always so busy raising the children... I also put things into perspective now, paying attention to what's really important and what's not. I enjoy the quality time with my children and doing things together with them. Cooking and cleaning can wait... Playing board games has to come first!”

“Instead of spending my time worrying and getting caught in the rush of life, I spend it helping others, helping the hospital, and doing good things for others—giving back,” Sharon said.

“Every day is a blessing to me now.”